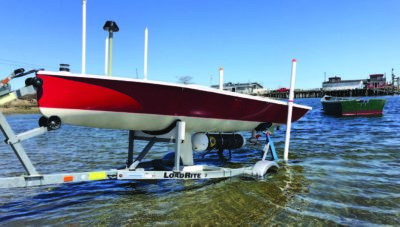 The Gulf of Maine supports productive shellfisheries that are frequently impacted by Harmful Algal Blooms (HAB), causing annual shellfishing closures along a broad swath of the New England coast. Traditional toxin monitoring involves harvesting shellfish, testing the meat for toxins in a lab, and then shutting down fisheries when levels are too high. This approach is labor intensive and after the fact.

Biologists from the Woods Hole Oceanographic Institution (WHOI) and Bowdoin College aim to improve shellfish monitoring through use of two new sensors that detect HAB species in the water directly. Both sensors, the Imaging Flow CytoBot (IFCB), and the Environmental Sample Processor (ESP), are manufactured by McLane Labs and are relatively large and require a fair amount of power, which is why most testing to date has been done with these sensors moored at fixed locations or deployed from piers. However, the researchers believe that mobilizing the sensors would allow them to sample a larger body of water and provide sufficiently detailed data over much larger areas.

In the late spring of 2018, the team used SeaTrac’s Development Platform to power the IFCB and make it mobile. The results provided information about how the instrument and the platform work together, sampling in confined passages close to shore in Harpswell Sound and then out in the open ocean in the Gulf of Maine, and helped determine what changes should be incorporated into SeaTrac’s production model.

As the boat travelled down the sound, the IFCB continued to sample and push data to a WHOI server that classified images of individual phytoplankton cells collected by the IFCB into different taxonomic categories, identifying HABs in near real time. Similarly, SeaTrac ASV data were streamed to a shore-based server through both cellular and satellite links.

Power: The solar panels were able to collect plenty of power to support the IFCB. It was spring in Maine with average weather for the test, and so future operations during spring, summer and fall are reasonable.

The new production model SP-48 is redesigned to provide a significant increase in power with a burst speed of 4.5 kts. In addition, going forward, the IFCB will either be installed inside the hull, or have a custom fairing to greatly reduce its drag.

Launch and Recovery: The ASV was easily launched and recovered with the standard ASV trailer from the local boat ramp in Harpswell. 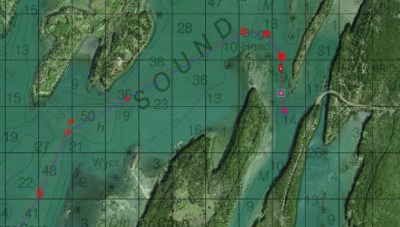 Communications: Despite spotty cell coverage in parts of Harpswell Sound, the combination of RF, cellular and satellite communications enabled the team to successfully monitor and control both the ASV and IFCB sensor during the entire mission and make any necessary changes.

Using the IFCB and ESP sensors allow us to detect and better predict landfall of HABs. And using the SeaTrac ASV as a mobile platform for the IFCB was a success. “As sensors go, the IFCB is pretty large and power hungry: what initially intrigued us about the SeaTrac platform was its ability to carry the IFCB and provide it enough power,” says WHOI biologist Mike Brosnahan. “I think this first test shows it’s a good fit. We’ve also learned some good lessons for future missions that deploy the IFCB from unmanned boats, and I look forward to applying those in efforts with the production SeaTrac SP-48.”