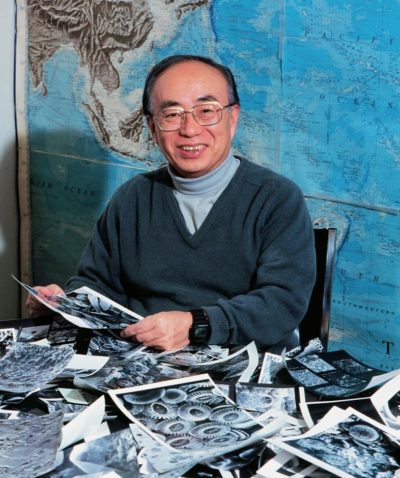 (Falmouth, MA) – McLane Research Labs announces with great sorrow the passing of its founder, Dr. Susumu ‘Sus’ Honjo. He died peacefully at home on 23 December 2020 surrounded by his family. His pioneering work as a scientist at Woods Hole Oceanographic Institution (WHOI) contributed to the understanding and observations of marine particle compositions and fluxes and of the oceanic biological pump. Dr. Honjo was a 2019 recipient of the first ever WHOI Distinguished Emeritus Award for his lifetime achievements.
Along with his pioneering research in biogeochemical particle flux studies, Honjo also led the development of several notable oceanographic instruments over four decades including the sediment trap, moored profiler, and ice-tethered Arctic environmental buoys.
In 1983, McLane Research Laboratories Inc. in Falmouth, Massachusetts was founded to make his instruments commercially available to the global scientific community. Hundreds of the instruments he developed have been deployed in every ocean of the world, and remain a significant tool for biological pump studies today. The company continues to thrive and in 2017, McLane was awarded Massachusetts SBA Exporter of the Year.
Sus was as proud of the team he built at McLane as he was of his instruments’ contributions to science. His wife Kazuko ‘Kay’ Honjo was an integral part of the company from its early days in the Honjo’s garage. He would often credit Kay as McLane’s true driver of success. He was also thrilled when his daughter Dr. Yuki Honjo joined McLane as President and COO in 2009. For many years, Sus was a frequent presence at McLane where he would attend meetings, investigate new product developments, and chat with staff about everything from current events, to the Boston Red Sox, and staff’s hobbies.
He was active in education and training programs, supervising many graduate students in the MIT/WHOI Joint Program in Oceanography and Applied Ocean Science and Engineering and postdoctoral investigators. His greatest joy in his final days was reading the research of his former students and mentees and seeing their success.
Susumu Honjo was born in Japan in 1933 and received his formal education at Hokkaido University in Sapporo. He was one the first post WWII Japanese Fulbright scholars to the US at Kansas University. He was later a Post-Doctoral Fellow at Princeton University. From 1963 to 1970 he was Assistant and Associate Professor at Hokkaido University.
In 1970, he set down roots on Cape Cod by joining the Woods Hole Oceanographic Institution (WHOI) as an Associate Scientist. In 1982 he was promoted to WHOI Senior Scientist (holding the Institution’s Columbus O’Donnell Iselin Chair for Excellence in Oceanography from 1989 to 1994). As one of the first oceanographers to measure oceanic particle fluxes and examine mechanisms of particle transport, his work gave rise to the explosive research field of biogeochemical particle flux dynamics, linking biological particle production, chemical transformations, and sediment composition—with the ultimate goals of quantifying the delivery and sequestration of carbon in the deep-sea.
He was a founder of the International Joint Global Ocean Flux Study (JGOFS), an international collaborative research project established in 1983 to understand the ocean carbon cycle. Through his 15 years of leadership, the project collected data through sediment traps at sites in all the major ocean basins of the world.
His distinctions also included directing the establishment of a new ocean research institution in Mutsu City, Japan; serving as part-time Executive Director of the Japan Marine Science and Technology Center (JAMSTEC); and serving as Director of the Joint North Pacific Research Center at WHOI, a collaborative effort between Mutsu Institute of Oceanography of JAMSTEC and WHOI. In 2003 he was awarded the Imperial Order of the Rising Sun in Japan, for his research on the transfer of CO2 from the atmosphere to the ocean’s interior and for his efforts to strengthen Japan’s role in the international ocean science research community.
In 2014 he was elected a fellow of the American Geophysical Union (AGU). In 2018, he received an American Association for Advancement of Science Fellow award.
He is survived by Dr. Yuki Honjo, his daughter, her husband Jason Cullinane, and two cherished grandchildren. His beloved wife Kazuko “Kay” Honjo, passed in December 2019. The family plans a celebration of life for both Susumu and Kazuko when the pandemic eases.
Contact:
McLane Media Relations
Mclane@mclanelabs.com
121 Bernard Saint Jean Drive
East Falmouth, MA 02536 USA
+1 508 495 4000