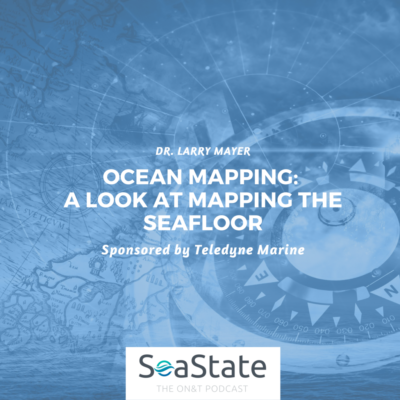 In episode 4 of SeaState we talk with Dr. Larry Mayer who has participated in more than 90 cruises (over 70 months at sea!) during the last 35 years, and has been chief or co-chief scientist of numerous expeditions, including two legs of the Ocean Drilling Program and eight mapping expeditions in the ice covered regions of the high Arctic.

Dr. Larry Mayer is the recipient of the Keen Medal for Marine Geology and has an Honorary Doctorate from the University of Stockholm. He was a member of the President’s Panel on Ocean Exploration, National Science Foundation’s Advisory Committee for the Geosciences, and chaired a National Academy of Science Committee on national needs for coastal mapping and charting as well as the National Academies report on the impact of the Deepwater Horizon Spill on ecosystem services in the Gulf of Mexico.

Further, Dr. Larry Mayer was the co-chair of the NOAA’s Ocean Exploration Advisory Working Group, and the Vice-Chair of the Consortium of Ocean Leadership’s Board of Trustees, and is currently the Chair of the National Academies of Science’s Oceans Studies Board, a member of the State Dept.’s Extended Continental Shelf Task Force and the Navy’s SCICEX Advisory Committee.